Billy Donovan, the long time coach of the Florida Gators after 19 years is leaving. Donovan is becoming the head coach of the Oklahoma City Thunder. In 2007, Donovan accepted a job with the Orlando Magic, but quickly turned it down.

The University of Florida, in classy fashion put together a highlight reel thanking Donovan for 19 years.

At times you hear the grass isn’t always greener on the other side. There are also times when you should leave your job when you hit your high mark. Sometimes, the opportunity is just so great that you have to take it.

Life takes us to many different places. Sometimes looking in the mirror, journaling, and evaluating our own self can help define us and who we are.

Nobody seems to realize that the reason there was an empty stadium was part of the riots that were going on in the Baltimore, Maryland area. It is a sad turn of events, that forced Major League Baseball, and the Baltimore Orioles organization to take such measures.

Safety is never more important. Especially after what we learned about 9/11. If if the National Guard, Police, and Security searched everyone, there is still valid threats to the safety of all. I applaud MLB and the Orioles organization for taking such drastic measures.

Hopefully those who are rioting realize that they are not proving anything or doing anything. They are just making things worse. Baseball is called America’s past time for a reason. It is to go enjoy a family game, talk, bond, eat, and enjoy a game of baseball.  Let’s wake up and work together. If we do, this world would be a lot better.

Lauren Hill is one of those many stories that you hear that is battling an illness or disease. Rather than be miserable and suffer, she lived every last day to the fullest. Her journey of being a basketball player was amazing. The chances she got in her last months, nobody could accomplish that in four years of College.

Her memory will last for yyears to come, and each year as the team suits up to play, they will think of Lauren and the stuggles she went through. Fighting an illness is not easy for yourself or your family. It is what you make of it, and the support you receive from your family and friends. The support Lauren received from around the world was overwhelming as well.

Here is the introductory video:

Here is the team that moved their game to accommodate Lauren’s wish.

Here is the tribute video CBS Sunday Morning did:

The NHL and the players have been showing their good side lately. More and more I am impressed with the great sportsmanship and class they have been showing. The first video is a video of an NHL player taking a selfie with a fan behind the glass. At first the player didn’t realize it, and after doing so, posed for the fan, and offered him some great memories for years to come.

Montreal Canadiens goalie Carey Price catches a young fan taking a selfie out of the corner of his eye and decides to join in on the fun.

This second video, is a little more of a tear jerker. This young girl Cammy is unable to speak. But vocally she can speak. She is a huge fan of the Chicago Blackhawks (Go Wayne’s World) and Duncan Keith helped her accomplish her wish of skating with an NHL player and scoring a goal.

Cammy was born unable to walk or speak. Her goal was to score a goal with the help of her favorite player, Duncan Keith.

It seems like the players want to go unnoticed when they did these random acts of kindness. Which makes it unique and special. The broadcasters are always looking for that special something, and from time to time they capture it. The few seconds one fan spends with an athlete is hours to them. The athletes are smart enough to realize that the fans appreciate it, and do what they can.

I have to say I was impressed by Alex Rodriguez hand written apology letter to the fans. With technology being the way it is, nothing says I’m sorry like a good old hand written note. For Rodriguez to write it, it shows that he is looking to move forward, and make the best out of what he has left in his career. Of course handwriting experts can analyze it, fans can still hate him for it. At least give him credit for having good penmanship and apologizing.

Too many apologies are blown out of proportion or are unnecessary. If the person is going to be genuine and sincere, then go ahead and write that apology. Don’t be phony.

Think about yourself and after you go on a job interview. They say you should write a handwritten note to those you interviewed with. Especially if you really wanted the job! It shows the person you took the time to write something original and showing that you are a team player.

Prior to this whole handwritten letter, it seemed to me that Alex Rodriguez didn’t care about the fans. A few times when people would interview him on the streets he wasn’t so friendly. It sort of makes you think that he maybe wasn’t being mean after all. Maybe he is a shy person. Playing for the New York Yankees will put you on the grand stage. You should be used to it. Randy Johnson was the only one who was miserable being a Yankee since he didn’t like being in such public view. That is why his tenure with the Yankees was so short.

Hopefully Alex Rodriguez can have a productive season with the New York Yankees. I wonder if I ran into him on the street how his reaction would be.

I have come to realize the other day that I’ve been watching NASCAR for the past twenty years. Yes, a fellow New Yorker is watching a mostly Southern sport. I came to realize it after Jeff Gordon announced his retirement.

How I got started watching NASCAR is all thanks to the #28 Texaco Car. My grandfather worked in the TEXACO factory in Bayonne, New Jersey. The driver for the 28 car was Davey Allison. Allison was killed in a helicopter crash in Alabama at a race track where his family was a fixture there. His father and uncle were both retired race car drivers.

Davey was part of the Alabama Gang, and to this day, the legend continues.

Growing up, I have always had a fascination with building things, cars, and etc. So it only became natural for me to start watching it on television. I even became fascinated with the pit stop. A group of six people jump over a wall, change four tires, gas, minor changes, in just under fourteen seconds! Yes, fourteen seconds. Any more time, your driver will lose the race. Furthermore, if it continues, members of the pit crew will be fired, or rotated immediately.

Getting back to TEXACO and the 28 car. There have been other famous numbers and cars in the series. One of them being the late Dale Earnhardt Sr. and the black Chevy #3. The intimidator. Darrell Waltrip and the 17 Tide race car, and even when he won the Daytona 500, Tide laundry detergent became a staple of American families.

In the early days of NASCAR is was race on Sunday, and the car that won, you would go to the car dealer on Monday and buy one.

Did you hear of Richard Petty and the famed 43 car, STP. If you didn’t, please stop and understand what he accomplished in the sport of NASCAR. All these drivers and other contribute so much.

Corporations put their name and image behind a race car driver and team. The air time alone they get on television is priceless, and makes some really loyal followers. While sponsors, drivers, car manufactures come and go, the sport still grows and changes with the times.

After the death of Dale Earnhardt Sr. on the last lap of the Daytona 500 in 2001, drastic measures were taken in making those race cars safer. Now when a wreck happens, most of the times the driver gets out on their own power and walks away. Some of the technology has even followed the normal passenger car that we know today.

I mentioned earlier about the Daytona 500. It is the SuperBowl of stock car racing. Actually it is the first race of the season. Not the middle nor the end. If you win the Daytona 500, you have made it. It took the late Dale Earnhardt Sr. 20 tries before he finally won it in 1998. Look it up on YouTube. The clip is priceless.

While I have yet to attend a live race, watching it on television makes you feel like you are there. The dynamic duo of FOX Sports. Mike Joy, Darrell Waltrip, and Larry McReynolds, can make anyone a fan of NASCAR. Their passion, and even their explanations don’t get boring.

The year NBC Sports is coming back on board. They will have a new broadcast crew, and will offer a different perspective. FOX and NBC split the season respectively. The NASCAR season runs from late February until early November. It is an all year round sport where race cars are being prepared, tested, tweaked, in any way possible to help them win. 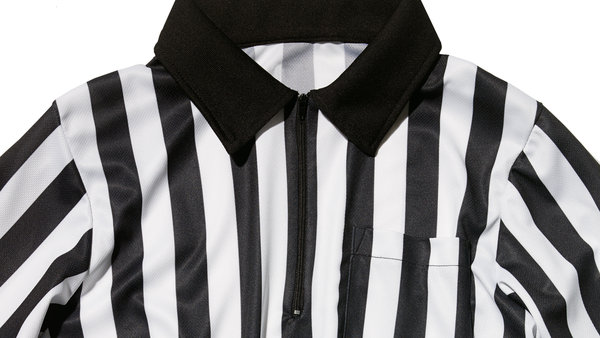 Who Made That Referee Shirt?“In the early days of football, the officials wore white dress shirts, often with a bow tie and usually a beret-type hat,” says Paul Lukas, editor of the Uni Watch blog, which chronicles sartorial trends in sports. “The notion was that a formally dressed gentleman has an air of authority, and that’s what you want in an official.”